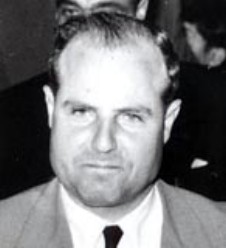 Today the "Lebanese Forces" are organizing a mass in Harissa in remembrance of its martyrs and the martyrs of the Lebanese war. Although former President Bashir Gemayel is acknowledged as the first martyr to the "Lebanese Forces" I would like to celebrated by this simple post my own Grandfather, William Haoui, also a martyr to the Lebanese cause.
William Haoui was the predecessor of Bashir Gemayel in the "Kataeb" (even before the LF were created) who, following William's death, was appointed his replacement as president of the Military Council.
"Chef William" was the former chief of the Kataeb Security Council: Joined the Phalanx organization in 1937, was appointed Head of the Second and Fourth Districts, President of the Recruitment Bureau, Head of the Department of Security, Sport and Mobilization on May 29, 1952, and member of the Political Bureau on July 12, 1952. On June 16, 1958, he was in charge of organizing and leading the activists during the Lebanese events; this constituted the hub of the Party's Regulatory Forces of which he became the leader on February 6, 1961. On January 23, 1961, the Political Bureau dissolved the militants' organization before including its members in the Lebanese Phalanx Party and creating the Regulatory Forces. On February 6, 1961, William Haoui was appointed Head of said Forces. In 1963, the “First Commandos” unit was created. It was followed by the “Second Commandos” unit, then by the “P.G.” troop. In 1973, the "Maghaweer" platoon was created and the “Combat School” established. Moreover, “Chef” William supervised the setting up of camps as well as the training organization and development, which enabled the progress of the regulatory process although work was voluntary and financial capacities were scarce. In 1952, the Lebanese Phalanx put William Haoui up for the Municipal Council in the Achrafieh-Rmeil region, where he obtained the largest number of votes. On July 1, 1976, the sources of the Lebanese allied forces announced the fall of the last bastion in Tell el Zaatar and declared that the Head of the Phalanx War Council supervised this operation.
On July 13, 1976, William Haoui was killed in the middle of the battlefield with a bullet in the forehead. After William's martyrdom in Tal El Zaatar Bashir Gemayel was appointed his replacement as president of the Military Council.
More information here: http://www.socialdemocratic.org/kataeb/index.php?option=com_content&task=view&id=23&Itemid=27
at 2:32 PM

A Great Martyr for Lebanon no question ask! God bless his soul