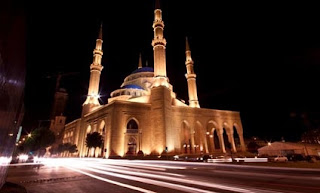 Trends always seem to follow a similar life cycle. Born out of innovation they take hold with the early adopters and enjoy a brief moment in the sun before the mass market gets hold of them and they inexorably lose their appeal. "What's he going on about this time?" you think to yourself. Answer: Fusion food.

The phrase used to have a real buzz back in the 90s with the likes of Asia de Cuba blurring national boundaries to expand our culinary horizons, but pretty soon the hoi polloi got in on the act. Chinese restaurants wanting to keep their current clientèle but also cash in on the popularity of Thai food suddenly became 'Pan-Asian,' whilst the local tandoori started to put the likes of spaghetti with curry sauce on the menu. McDonalds even has a McAloo Tiki (TM).

It was with this slight prejudice in mind that I was at first skeptical about the idea of Lebanese fusion food. Having indulged myself on the classics for a couple of days, I was fairly convinced that Beirut had a solid formula not to be tampered with, but then I went to Eau de Vie. Sitting atop the Phoenicia Hotel, Eau de Vie is presided over by internationally acclaimed head chef Rabih Fouany, who has been combining local ingredients with European influences to produce unique results. Foods like kishik and frikeh would normally be the staples of a Lebanese village diet, so their inclusion in the likes of risotto and velouté was a real eye-opener. For those who thought Lebanese food was all about the 3 am post-club shawarma, it's time to experience the Nouvelle Vague ...

From the city, my next stop was to investigate a quiet oenological revolution in the Bekaa Valley. To the uninitiated, it may come as a surprise to know that Lebanon is producing some seriously respectable wines. So, in the name of thorough research, I set up a tasting. The vineyards themselves are a venerable 150 years old but the wine making tradition of Lebanon goes back as much as 5000 years. I spent an afternoon at Chateau Ksara with Rania Chammas, whose knowledge was as profound as her generous hospitality. Needless to say my sore head the next day bore testament to this and I would recommend you spend an afternoon there.

Next time on World Kitchen I'll be checking out a side of Lebanese food which holds a particularly fond place in our hearts ... the post party munchies!

For Patrick's other entries, go to his blog homepage.