For millennia, sea turtles have swum ashore every summer to lay their eggs on beaches in what is now southern Lebanon. After incubation, the hatchlings race across the sand from their nests to the sea at night. A chance encounter with a sea turtle one night in 1999 inspired Mona Khalil to create the conservation project at Mansouri and Kolaila that is unique in Lebanon. Mona, then living in the Netherlands, had returned to Lebanon to visit her family’s beachfront farm. One moonless night, she was amazed to spy a green turtle laying eggs on the beach – and when she discovered that turtles were in danger of vanishing from Lebanon, she immediately knew what she would do when she came back to live there. In 2000, just after Israel withdrew its troops from south Lebanon, Mona and her assistant Habiba began restoring the farmhouse, researching turtles and consulting experts on how they could protect them. This turned out to be labour-intensive – keeping the beach clean, daily monitoring to gather data during the nesting season from May to September, relocating nests higher up the beach if they were threatened by agriculture runoff or sea flooding and installing metal grids to protect them from predators. “We were spending a lot of money on the sea turtle project and no one was helping us, so we decided to rent out a room,” Mona recalls. That was the beginning of the Orange House bed-and-breakfast, an eco-tourism venture that helps fund the project.In 2006, Israel’s war in Lebanon briefly forced Mona & Habiba to leave the farmhouse, which was damaged two days later by an Israeli bomb. But the 34-day conflict did not deter the turtles, which laid 79 nests that summer, the highest number since the project began. The war had kept people off the beach, leaving the turtles undisturbed. But it also brought a new predator in the shape of foxes, apparently driven from the hills by intense shelling. More than two years later, they are still around, having become more adept at raiding nests than the dogs that were previously the main threat. Illegal dynamite fishing near the shore and rubbish on the beach also endanger the turtles. Human activity and lights during the night on the beach can prompt females to drop their eggs instead in the water, where they are doomed. Mona and her assistant try hard to spread ecological awareness among local people and visitors in a conflict-torn country where environmental issues have had a low priority. 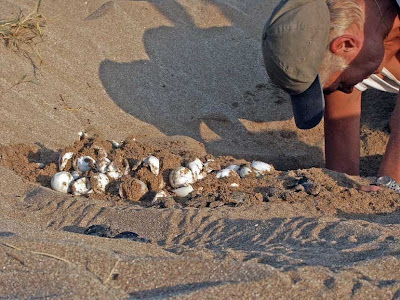 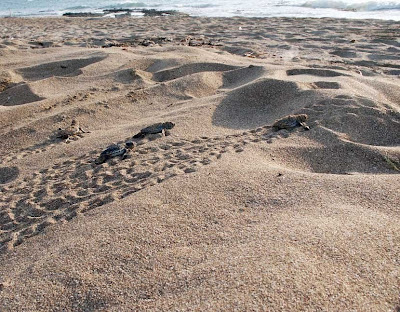 Early every morning is when we go on rubbish patrol along the beach, putting litter and washed-up trash into bags that will later be removed by the municipality. Turtles and other marine life on the Lebanese coast are threatened by pollution that includes plastic bags, hospital waste, factory chemicals and fertiliser run-off from farms. Plastic bags in the water can suffocate turtles, which mistake them for jelly fish and try to eat them.During the nesting season, we also look for tracks of turtles and their efforts to camouflage their nests. Once we find the eggs, which need 45 to 60 days to incubate, we remove some sand and lay a one square metre metal grid over them, anchored with iron hooks. This keeps out dogs and foxes, but leaves holes big enough for hatchlings to get out. Sometimes we relocate the nests further up the beach if they are in danger of flooding from the sea or if they are too shallow.To get a clear picture of how sea turtles behave during the nesting season and what their needs and preferences are, we collect scientific data, which can also be fed, into bigger surveys on Mediterranean Sea turtles. We count the nests and measure how far each one is from the sea and from the nearest vegetation. We measure the size and weight of sample eggs, which are about as big as ping-pong balls. We record how many nests are raided before the eggs hatch – and try to rescue any survivors.
Email: orangehouseproject@gmail.com
Phone: +961 7 320063
Website: http://orangehouseproject.com/