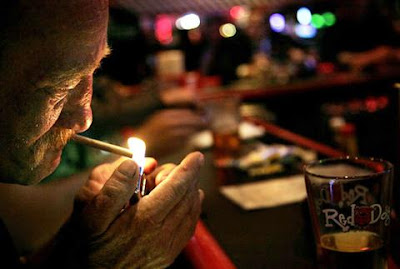 The law was presented for vote with an amendment that would see owners of businesses fined if they fail to prevent their costumers smoking, and will also fine individuals who violate the ban.

Under the new law tobacco advertising and promotion will be illegal, including billboards, magazine advertisements and tobacco company sponsorship of events and concerts. The bill also calls for a pictorial warning of the dangers of smoking covering 40 percent of each pack.

Hotels are allowed to set aside 10 to 20 percent of their room for smokers.

Companies now have a set period in which to implement the new policies.

Lebanon has been obligated to pass tobacco control legislation since the World Health Organization’s Framework Convention on Tobacco Control, which the country signed, entered into force in 2005

Also set to be considered Wednesday is a draft law which would equalize marriage discounts for working men and women who pay income tax. Currently, married women receive less of a discount on their income tax than married men.

A draft law which would give compensation to ex-detainees of Syrian prisons is also on the table, as is legislation that would bump up the employment status and pay grade of employees and retirees of the Ministry of Telecommunications.