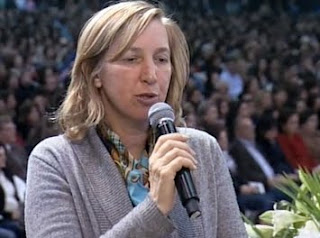 The visionary’s visit is in response to a personal request by Our Lady to go to the Lebanon, which Marija received during one of her apparitions with the Blessed Mother.

Marija Pavlovic-Lunetti still receives daily apparitions from Our Lady at 6:40 PM since more than 30 years, and she is the one to receive the monthly message given to the world by Our Lady on the 25th of each month. 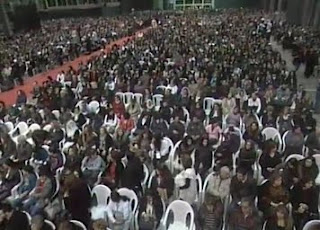 Latest Messages of the Queen of Peace here: http://www.medjugorje.eu/mary.html

Multi hall in Lebanon was at full capacity when visionary Marija Pavlovic-Lunetti had public apparitions in the Middle East on Saturday and Sunday. Attendees report of an immensely joyful crowd of just about 50,000 people each day. Live transmissions showed an enthusiastic crowd with obvious belief in Christ’s Real Presence in The Blessed Sacrament. 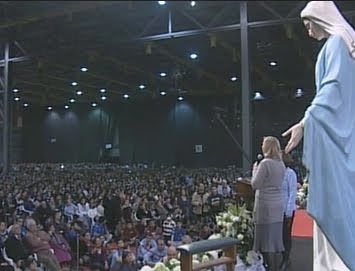 The great joy of between 50,000 and 60,000 people filled the multi hall Forum de Beyrouth in Beirut, Lebanon, when Medjugorje visionary Marija Pavlovic-Lunetti took the apparitions to the Middle East on Saturday. An identical number of people were present when the event was repeated on Sunday. Led by the Maronite Archbishop of Beirut, Monsignor Paul Matar, about 100 priests were present.

The Archbishop presided over the Mass on Saturday. Confessions were heard throughout the hall, the Lebanese newspaper L’Orient Le Jour is reporting. Like eyewitnesses, the local news media estimates about 100,000 people attended the two days of prayer and sharing.

“It was an out of this world experience.  I have been to Medjugorje twice already but to experience this in my home country Lebanon is a special blessing. People who attended (we were 50,000) were mostly people who heard of the Virgin’s messages but were never able to travel to Medjugorje. It was such an exceptional moment to us all. We were so eager to have the Blessed Virgin appear in Lebanon and bless this torn country” attendee Chirine Karout tells Medjugorje Today.

“I personally thought that she was happy to come to a country where Christians and Muslims are so devoted to her. The Lebanese needed so much to experience this in order to revive their faith and become messengers of peace in their country and in the region” Ms. Karout continues.

“More than 60,000 persons were in the Forum de Beyrouth at 3 pm waiting for the programme to begin at 6 pm. It was so beautiful to see all the Christians in Lebanon singing together to Our Lady, and for the peace in our country. Marija told us that Our Lady blessed us and stayed longer than usual, and that she looked at each and everyone present” attendee Maha Zgheib reports to Medjugorje Today.

“It was a once in a lifetime experience. We felt the presence of our Mother with us, and love and peace filled our hearts” attendee Tamara Abou Zeid testifies.

On both days, the event was being broadcast live by the Lebanese tv station Noursat. The transmissions revealed a crowd with an obvious belief in the Real Presence of Jesus in The Blessed Sacrament which was being carried through the hall as people were applauding and reaching out for the monstrance.

Accompanied by her husband, Marija spent part of Sunday visiting the shrines of Jbeil and Batroun, the newspaper L’Orient Le Jour further writes.