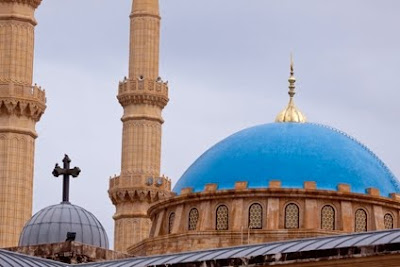 It's always slightly disconcerting when you get off a plane and find airport security waiting and asking your name. I was briefly concerned that my first trip to Beirut was going to be spent in a jail cell, but I soon realised that my hotel had arranged for a personal escort to arrivals.

Wondering which Hollywood celebrity I'd been mistaken for, I decided to enjoy the moment as the immigration queue parted like the Red Sea and an incredible trip began ...

To the uninitiated (or those initiated by CNN), you'd be forgiven for thinking that Beirut was a rather troubled city, though anyone who reads the likes of Tatler and GQ know it as an emerging force in the world of all things epicurean. Inspired by a love for Lebanese food, I decided a four-day trip was in order, a gustatory reconnaissance mission with its beginning in traditional cuisine.

For authentic insight into a country's cuisine, a great place to start is the local farmer's market. In Beirut, Souk el Tayeb doesn't disappoint. I was fortunate enough to meet the organiser of the market, Kamal Mouzawak, and quickly realised that this market goes way beyond a simple amalgam of local produce. For Kamal, the market is practically a socio-political statement that people from myriad backgrounds—religious, political, and idealistic—can be united through a common love of all things edible. Each week all sorts of lively characters travel from the four small corners of Lebanon to sell their wares, and the sense of community was almost tangible. But let's talk food.

Lebanon has been a cultural melting pot for a long time, owing in no small part to occupation by the Ottoman Turks and later the French. Enlisting the help of Chef Malek from the prestigious Phoenicia Hotel (it's amazing the doors ASW can open), my Lebanese food vocabulary grew quickly as we ploughed our way through the incredible mezze in the market. Battata Harra, Fatayer, Saj ... you name it I ate it. When the time came to cook lunch, I wasn't sure I could take much more (but, of course, I did).

The thing I love about Lebanese people is the matter-of-fact way they describe their cuisine as the best in the Middle East, like a fact not up for discussion. Chef Malek is more accustomed to catering to the hundreds of guests from various backgrounds that walk through the doors of his restaurant, Mosaic, but he took time out to show me some of the basics.

This week we'll cover a couple of simple, familiar dishes that you might not know how to create yourself: Kibbeh and Fattoush. In my next installment of World Kitchen, we'll check out one of Beirut's top chefs and take an entirely modern look at local cusine. Yalla!


For Patrick's other entries, go to his blog homepage.
Photo by Emma Smart
at 2:22 PM