BBC: Why is Beirut still a byword for chaos? 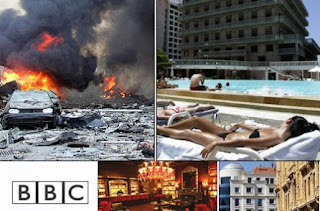 BBC: Why is Beirut still a byword for chaos?
The expression "it's like Beirut" is a much-used comparison for everything from violent riots to a teenager's bedroom.  Why do we still insist on associating Beirut with chaos? When North East Lincolnshire Council announced this week it would be demolishing a notorious crime-ridden street in Grimsby, one resident said it would no longer be "worse than Beirut". It's not the first time the comparison has been used and probably not the last. From Joe Public to world leaders, the phrase "like Beirut" is shorthand for chaos and decay. Since 1991, the year after the Lebanese civil war ended, there have been more than 50 recorded usages of the phrase, according to Robert Groves, editor of Collins Dictionaries. It began with a reference to a Chicago slum on American National Public Radio. Lebanese blogger Jad Aoun records usage of the phrase and mails the culprit a "looks like Beirut" certificate. ast year he sent out about 30 certificates, mostly to the UK and US. But he says the phrase is also used in other countries, from Australia to India. here is little doubt the association between Beirut and chaos springs from Lebanon's civil war. But it has been over for nearly 20 years and since then the world has seen countless other wars. So why don't people say "like Baghdad" or "like Sarajevo"? Te answer is partly down to timing. In the UK, the civil war was the first international conflict taking place in the age of 24-hour news. People were updated almost daily.
Ignorance
Since television news is a highly visual medium, the images coming out of Beirut had a lasting impact, says David Seddon, associate editor of the British Journal of Middle Eastern Studies. Add to that the length of the war - it lasted from 1975 to 1990 - and the cultural impact becomes clear. The news was saturated with stories about Beirut for a long time," says Dr Youssef Choueiri, reader of Islamic studies at Manchester University. Those stories also became personal due to westerners being taken hostage during the crisis, notably John McCarthy and Terry Waite. "This idea of having British hostages in Beirut and no one could rescue them... turned Beirut into a lawless city," says Dr Choueiri. "It became the symbol for urban chaos." That sense of chaos was exacerbated by ignorance of the overarching situation in Lebanon, argue some. It seemed like everyone was fighting everyone else. "For people who didn't know about the Middle East, it was fairly baffling," says Mr Seddon. More recent wars in Iraq and Afghanistan have seen "episodic bombings" - not civil war, says Dr Choueiri. In addition, the association many westerners had with Beirut as a glamorous holiday destination made its transformation into a warzone all the more striking, Mr Seddon says. Pre-civil war, Beirut was a sophisticated waterfront locale, similar to current-day Dubai or Monaco. So the descent of glittering, cosmopolitan Beirut into "appalling mayhem" significantly impacted the people who previously may have visited the city. So although Baghdad and Kabul have suffered similar physical devastation, they had never really been considered glamorous urban vistas in the first place.
'Irritating'


"The level of physical destruction was pretty high," says Mr Seddon. "It did look to people in Britain rather like London after the world war." But that physical destruction is no longer an issue in Beirut. Since the end of the war, the city has undergone a revitalisation of sorts and is a holiday destination once again. The New York Times named it one of its "44 Places to Visit" in 2009. Nearly two million people followed the advice. The attempt to return Beirut to its pre-civil war image has been hampered by violent outbreaks in the capital in 2006 and 2008, says Dr Choueiri. But in his experience, the Beirut of today is cleaner and better controlled than people might expect. "The image itself is shifting," he says. "This Lebanon is different. It's entering a new phase." Such an outdated expression need to be laid to rest, says Mr Aoun. He uses his certificates to raise awareness of the accuracy of people's perceptions. He also believes there might be a simpler explanation for why we insist on using the phrase - laziness. It is basically a cliche and doesn't provide an accurate description of what they're trying to say," he says. "I can understand its use in the 1980s and 1990s, but in this time we can move beyond it." Of the 30 letters he sent out in the past year, he has received four responses which he calls "generally positive." One British journalist responded: "I realised [it] was offensive towards Beirut, and could indeed be seen to perpetuate a negative image of the city." Indeed, all Beirut's champions ask is that people stop and think before resorting to the outdated metaphor. "We know that there are cities that are worse than Beirut," says Dr Choueiri. "[The saying] doesn't do justice to the long peace Lebanon has enjoyed since after 1990."
Plus, he says, it's just downright irritating.
at 2:46 PM

This is a very interesting blog and so i like to visit your blog again and again. Keep it up.